$10 Suggested Donation; no one turned away

On Friday, June 1, Marckx will share from his program “The Heart’s Reckoning” with stories drawing from self-composed pieces and Russian folktales.  The story “Basket Woman” comes from Marckx’s own novel Broken Charlie, about a Northwest Native-American who learns to carry his wounds and through them to heal others.  Another story Marckx will tell, “I-Know-Not-What from I-Know-Not-Where,” is, according to Marckx, a Russian folktale that ultimately refers to the core energy one finds at the end of a quest, assuming that they survive.

As is our tradition, we will also host an open mic section, so please bring your own short story to share… only rules are it must obviously be a story and no reading, everything must be shared in the ways of the oral tradition.

Sharing about his own path to storytelling, Marckx says, “Through some dark days I began to follow a thread of stones I found in the wise old tales.  Their consolation made me want to learn them, take them into my life and bring forward their nuggets of wisdom.  My connection with others through story–theirs and mine, with the old tales for touchstones–has become a constant for me now.”

Besides telling the old tales, Marckx has been writing and telling his own tales and poems.  He has written one novel, Broken Charlie, and is at work on a new novel, based on a version of a folktale from the Brothers Grimm (“Three Golden Hairs from the Head of the Devil”), which he calls The Titan of Wisdom.

For the last ten years Marckx has been a member of a men’s group, A Gathering of Men, in Edmonds–Bothell, where he tells stories, is blessed with the wisdom of other men and does his own personal work.

Brian Rohr is a storyteller and healing arts practitioner living here in Port Townsend, WA.  Having moved from Chicago in 2007 to study with local master Storyteller Daniel Deardorff, he has since shared myth from different cultures to national and international audiences.  Locally, Rohr first began hosting a bi-monthly Storynight at the Boiler Room in 2009, before moving it to its present monthly format at Better Living Through Coffee for the last 2 ½ years.  He is an active Board Member of the Mythsinger Foundation and fully believes that the old stories are alive, vital and can inform us on how to live our lives as authentic human beings.

This monthly event explores the art and ritual of the oral tradition: sharing the old myths, folk tales, and fairy tales along with more modern stories and personal sharings.  Showcased will be local and visiting storytellers, musicians and weavers of magic with words.  Each month, there are two to three featured tellers, and space for guests in the audience to share a story or two during the open mic sections.  First Friday Storynight is supported by the Port Townsend Arts Commission. 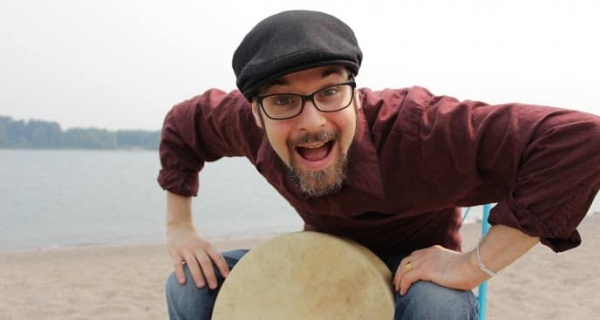